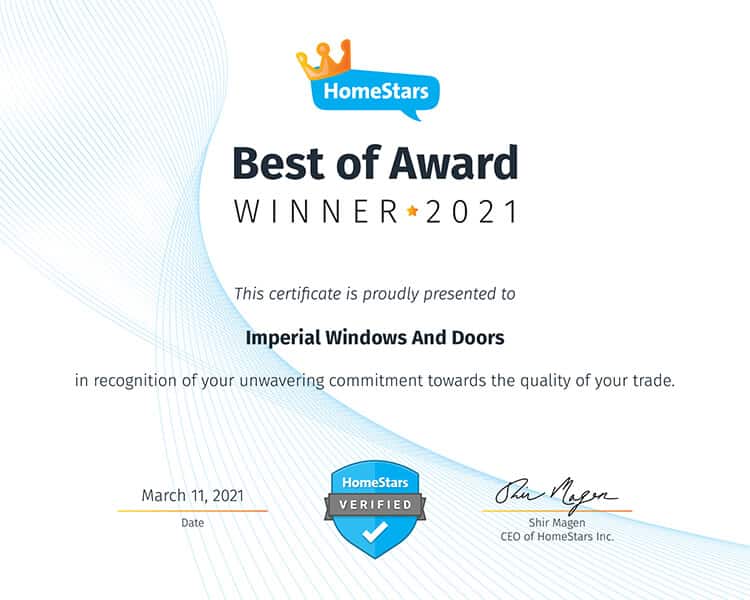 “Imperial Windows and Doors did a beautiful job putting in a new front and back door for me. As mine is an older home with odd size doors they had to do a considerable amount of extra work to install the new doors. At my request they managed to salvage the old Art Deco trim and get it to fit the new frame. They are conscientious, friendly, efficient and tidy. I would definitely hire them again.”

“Imperial Windows and Doors are very dedicated to their workmanship and service that they provide, and pride their self on their company’s reputation. We replaced an old sliding door into the backyard with an out swinging French door. Everything was great, and exactly on time and as promised. I would absolutely recommend their company’s work to others. They stand by their words and do everything they can to correct issues. As an example, our only ‘issue’ was that although we didn’t want a screen (which defeats the purpose of the French Doors), the door ‘package’ came with one, and so the assistant installed it. Although the screen can be removed, the issue was that the ‘rail’ for the screen requires it be screwed into the white base. Removing the rail results in the holes showing. This Company did try hard to find flat screws to conceal the holes (in the end, I found a more low-profile, concealed screw at HD). Again, I think that Imperial and their crew are awesome, and work very hard to make sure everything is as good as can be. Thanks Imperial Windows and Doors!”

“Imperial did a great job with installing my windows. They worked efficiently and professionally. The windows look great and I am very happy with the service! I would strongly recommend them.

“Fast, affordable, friendly. Had large patio door and picture window installed. They were the most affordable estimate I received. They came when promised and completed the job quickly. They left absolutely no mess behind. Will be using them again to replace other windows in the near future and would refer them to friends and family

“I recently purchased a front door from Imperial. Imperial provided a good price and excellent service. They are responsive, polite, punctual, and provided excellent follow up service. The door has added value to my home’s curb appeal. I have referred Imperial Windows and Doors to family and friends, and would be pleased purchase from them in the future.”

“Great service, got what I asked for without them trying to sell me something else. Kind and highly ethical employees who did their work very professionally trying their best not to disturb our usual household operations. Received the service in least time expected, kept their work clean and tools organized, amazing, highly recommend their services to anyone and everyone. As well, company provides a great variety of options with different styles and designs to fit all.”

“I needed to change my 3 front windows. I was looking for the best price with the best quality and I found Imperial windows and Doors. They did an excellent job! Everything went smooth; they came on time and did a professional job. After they finished the entire job, the house was clean as before they came. I definitely recommend this company to anyone who needs windows or door replacement.”

“Imperial windows and doors did excellent job in replace my old windows. They are very professional and experience .They gave me a good price and customer services. I highly recommend this company.”

“My bedroom windows were very old and one of the windows was licking. I decided to change 3 bedroom windows and got Imperial Windows and Doors number from a friend of mine. Henry came to my house and gave me a reasonable price. The job was done in less than three weeks from the day he came to see my windows. Imperial did a great job! Professional and very clean. I’m very happy.”

“Imperial windows did a great job replacing my backyard door. I had a patio door and they manage to replace it with a beautiful french door that has the mini blinds inside. They did all the job in 1 day and I’m glad to have my new french door. I’ll definitely recommend them to anyone I know.”

“I had recently had two windows and a door replaced by Imperial Windows and Doors, and I’m very happy with their quality of work, product and professionalism. I Would definitely recommend this Imperial to anyone due to the helpful attitude, highly capable workforce, and an excellent product quality & price!”

“Imperial Windows and Doors replaced all the windows in our newly purchased house. The house was old and required new windows and doors. Henry and his team did an extraordinary job! We love the new windows! It’s even better than we imagined! The backyard slide door is great! The installation was extremely quick and allowed us to move in within a few days! Thank you Imperial Windows and Doors! We highly recommend you to all our friends and family!

Imperial Windows/Doors are professionals in their business. All it took was a tel call to Henry, to visit the house n give me a quote for the replacement. He obliged by promptly dropping in and giving the quote which was not costly. After 2 weeks as promised he visited with his staff n fixed the Window professionally and Quality as agreed without any hassle r hidden extra costs. he called in the next day for a follow up on the job done. I would sure recommend him to prospective clients n friends.”

“Possibly the best experience I have ever had with a home contractor period. On time every day, work commenced and completed on time. Clean and quick…and the best price I could find. My windows have now been installed a couple of months and we are very satisfied with their operation and look. I would confidently and have, referred Imperial and their company to anyone who required his services. Henry and Imperial have a very long and bright future in this industry. Thanks again and best of luck!! Gerry in Toronto”

“Imperial Window and Door did my windows 1st. We were so happy with their quote and very impressed with their fast, punctual and clean work, that we re-hired them to do our front door. Their team is very respectful and organizes. I highly recommend this company. We are so happy and proud of our new windows and doors and we get nice compliments from the neighbors. We have referred Imperial to friends and relatives, and they are just as happy as we are.”

“Imperial Windows were a great help in making our new place comfortable. We bought this older home that requires serious help and we thought the windows would cost take away our reno budget. When Henry came to give us the quote, we were so happy that we booked him immediately. Our windows now are clear, beautiful and much more energy efficient. Thank you, Imperial!!! Good luck on your business.”

“We found out about Imperial Window and Doors service on the internet, and my husband contacted Henry. He came over to our house on the day of the phone call and we discussed and arranged a fair deal regarding the replacement of our side entrance door and storm door. The proposed price was very fair, so we finalized quickly made an advance payment. They were very punctual and did exactly what they needed to do efficiently and very quickly and cleanly. We were satisfied with their service, and we recommend anyone who would need such services to contact them.”

“My husband and I have a bay window in our living room, which had started leaking and we were talking about replacing it. As I drove down our street, I saw Imperial Door and Windows working. They were doing an amazing job. They came over to give us an estimate, which was very reasonable. They were punctual and worked very hard. I would definitely recommend them to my family and friends.”

“Imperial Windows and Doors did a great job replacing all the windows in my house. The guys from Imperial were nice, honest, and professional. They installed all the windows, put foam insulation, and finished it nicely with aluminum capping and caulking. I’m very happy with their job and definitely will recommend this company to anyone who want to get their windows done.”

“The guys from Imperial did a great job at my place, they were very nice and professional they removed the old windows and placed 3 new windows on the second floor of my house, I plan to slowly replace all my wooden windows, and will definitely go with Imperial.”

“I hired Imperial Windows and Doors to replace 2 large living room windows and a basement window in my house, they gave me the most reasonable price for energy efficient windows out of 4 companies that I called and received estimates from. The team from Imperial did a great job! They were professionals, came on time, worked very clean, and had great customer service. I will defiantly recommend them to anyone who wants to get their windows replaced for reasonable price

“I live in a house that is now 10 years old, a few weeks ago I decided that my windows were leaking too much heat to the outside, and decided it was time to replace them with something that provided better insulation. I called Imperial Windows and Doors and got them to come in for a consultation. I found them to be very knowledgeable; they took me through my best options (keeping in mind my budget) and gave me a really great price. They came in 2 weeks later for the installation, they were professional (respectful of my house) they installed the windows very quickly and did a great job (windows look phenomenal), cleaned everything up after they were done! I couldn’t have been any happier! Thank you Imperial Windows and Doors!”

“A friend of mine recommends Imperial Windows and Doors to me when I needed to get a new front door. I got the new stained fiberglass door that has a great wooden look. Their team did a great job; I was really impressed with their attention to details. If I had any concerns Imperial addressed them promptly. Overall I would definitely recommend these guys.”

“Imperial Windows and Doors did a fantastic job replacing 6 windows in our house. We were looking for a contractor for a while and were recommended Imperial through a friend that was very satisfied with his work. Very reliable, punctual, and professional. We got exactly what we wanted and it’s beautiful! Thank you guys!!”

“I always wanted to have a patio door in my kitchen so it will be easier for me to get out to my backyard. I had a window and I was looking for someone that will cut the bricks and install a patio door instead of that window. I found imperial windows and doors over the Internet and decided to give them a call. Henry came over to my house and explained to me what he will have to do and what product I will get .After two weeks from the day Henry was first at my house, the guys from Imperial came back and started this project. The guys did a professional job cutting my bricks and installing my new door. I am very happy with the Job they did at my house and I will definitely recommend this company to my family and friends.”